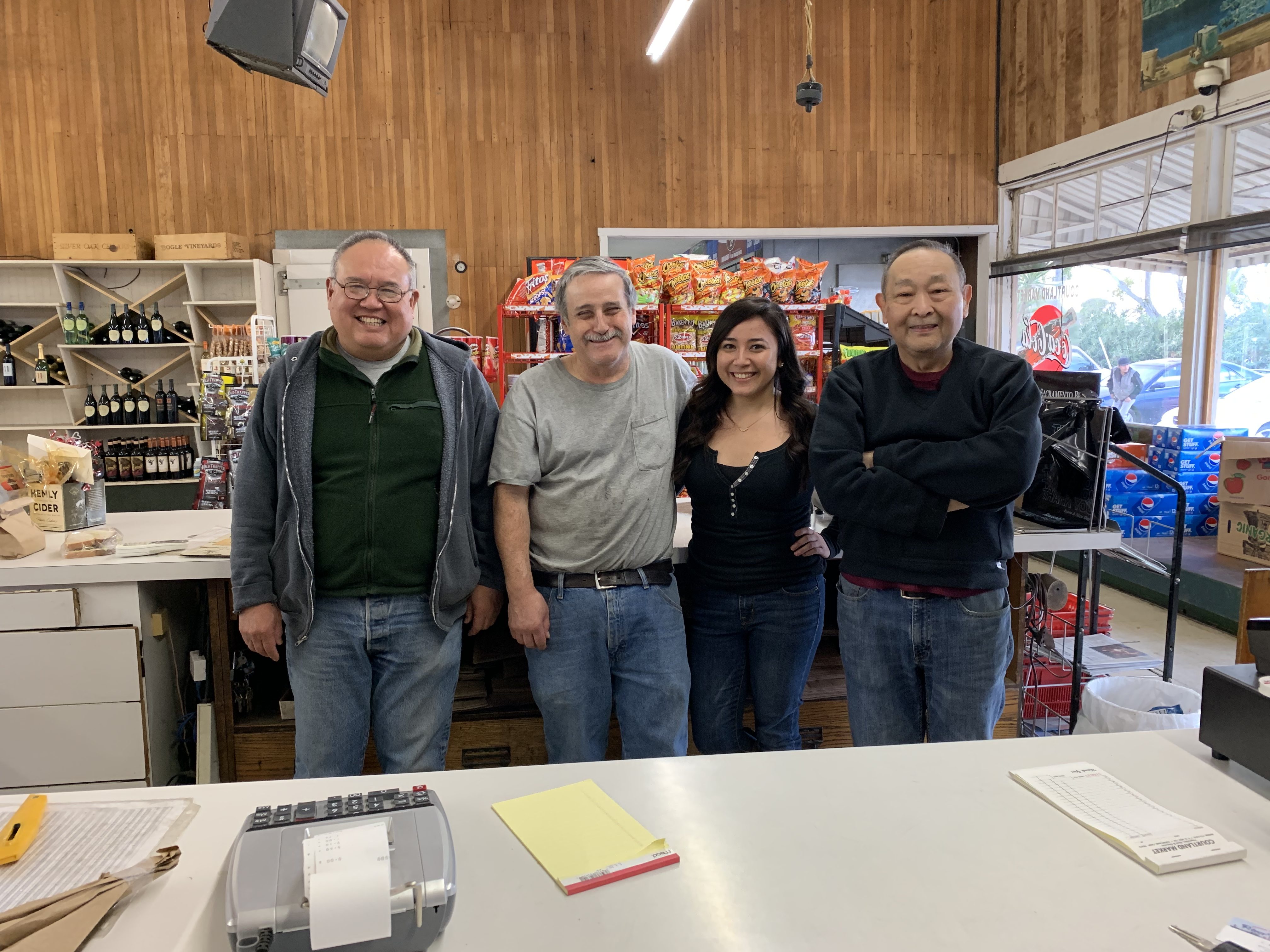 For over 40 years, the Courtland Market has been a family-owned business on the Delta. Our small-town grocery store had a deli and meat department, which was a staple to our community. From deli sandwiches and cheeseburgers to tortas and burritos, our food was made fresh daily. We also had a unique arrangement of meats which included our homemade hamburger, sausage, and chorizo. For holidays, customers could order specialty items such as standing rib roasts and ham. We enjoyed meeting, greeting, and serving the community throughout the years.

As the years went on, generations of families and out of town customers came through our doors with smiling faces which brought us such joy. In February of this year, the store was sold to a new owner and we said our final goodbyes. Thank you to everyone who supported us for decades. Our community is one of a kind and we are forever grateful. 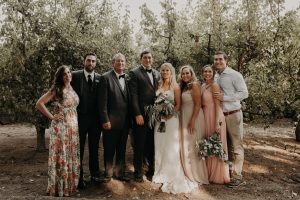 Richard Elliot is a 5th generation Courtland Pear Farmer. He has been an active member of the of the Delta his whole life, attending Bates Elementary and Delta High School, playing all the sports that Delta had to offer. At California State University, Chico he met his wife Becky. After graduating with a degree in Ag business he returned to Courtland to help run David J Elliot & Son. Richard and Becky have 3 children, Rich Jr, Ryan and Rachel who are all involved in the business. In his free time he enjoys boating on the Delta, eating at the many great Delta restaurants and spending time with his family. Richard is also an active member of California Agriculture, he is on the board of the California Fresh Fruit Association and the California Pear Advisory Board. He is a sponsor and advocate for the Sacramento Farm-to-Fork movement and donates to Produce for Better Health Foundation, the California Food Banks and many other Agricultural Organizations. Richard is incredibly proud to be apart of the Courtland Community and the Pear Industry and is honored to be the 2018 Pear Fair Grand Marshall! 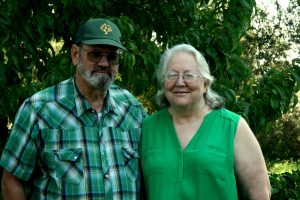 Tom and his loving wife, Laura, live on their farm near Snodgrass Slough.  Officially retired, Tom has been a resident and third generation Delta farmer his whole life. His local family heritage dates to the late 1800’s when his grandfather started farming at a ranch in the Pearson district of Courtland. Dairying (Delta Dairy) was the primary family business. The Delta Dairy produced milk and dairy products delivered throughout the region, until it sold in the 1950’s. Open land farming prevailed for over ten years when the family began planting wine production grapes. Tom worked as shop manager and director for the family farm before he retired about six years ago, when the farm was sold. Twenty-five years or so ago he started collecting books and is now an avid used and rare book collector and dealer, selling books and other collectable items in Locke’s Strange Cargo store. This fascination led to a personal collection of many Delta and California history books. Tom graduated from Courtland’s Bates Grammar School and Bishop Armstrong High School in Sacramento. He then attended Sacramento City College before entering the Air force, where he worked as a heavy construction mechanic and welder. When his service ended, Tom came back to the family ranch to farm. In 1980, he and Laura were married. They have had many wonderful years together, with their growing family of children and grandchildren. No matter what direction he takes, she has been supportive of his ventures. Tom interests include agriculture, fishing, hunting, photography, books, collectables, art, cooking, farm equipment, gardening, and local history.

He has been involved with many organizations over the years. He’s a past VP/director/ founding member of North Delta Conservancy, past chef at many Delta events, friends of the library volunteer, past volunteer for the Delta Food Bank, past director St Anthony’s Church, past president & current director Sacramento River Delta Historical Society, past director Sacramento County Historical Society, current trustee (past 40 Yrs.) and President Reclamation District 813, past member of the  Farm Bureau, past volunteer for 4H, boy scouts and FFA, member of various friends of the library, member of Sacramento Book Collectors Club, current & past chair of Pear Fair historical display in Courtland and member of past and current Pear Fair committee. Tom has been involved with the Pear Fair since the early 1980’s He enjoys setting up the Sacramento River Delta Historical Society’s display in the auditorium every year, finding event programs and developing new ideas for the organization. He recently assisted in the updating of Pear Pearfection, a cookbook developed by Barbara Dahlberg in the 60’s and available at this year’s Pear Fair. Tom has many pear growing friends and promotes the Delta Pear industry when ever possible. 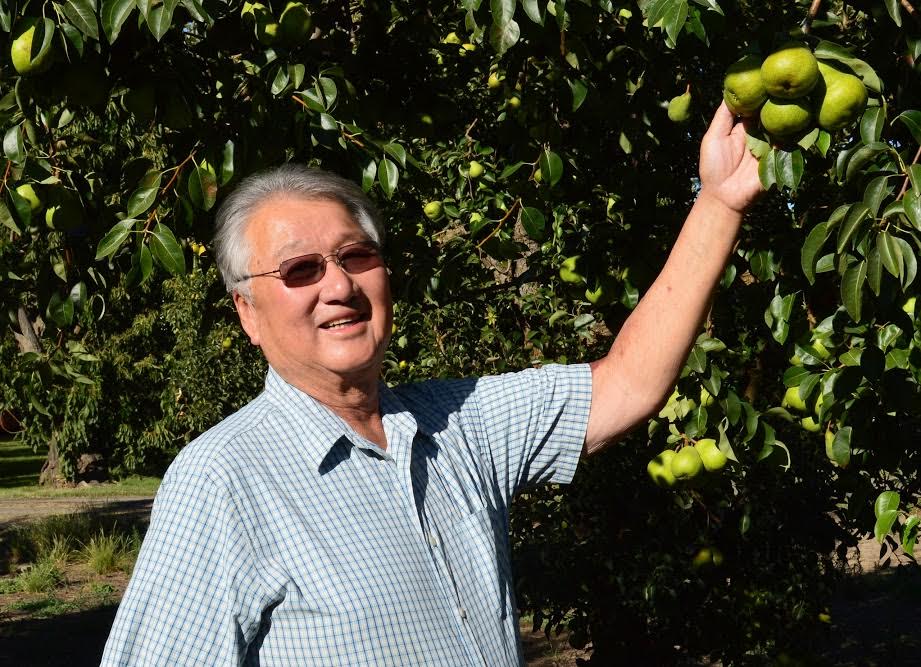 Doug’s history on the Delta as a talented farmer and strong, supportive community member began long before he was born. His grandfather immigrated to America in 1898 and settled in San Francisco as a merchant. After the Great Earthquake in 1906, he moved to Courtland to tenant farm and eventually opened a grocery store in Courtland’s Chinatown. In 1938, Doug’s father, Lincoln Chan, began farming and by 1942, Lincoln had purchased his first pear ranch. Farming was a way of life for Doug, and after graduating from Cal Poly SLO in 1965 he started leasing his own land to tend as a 3rd generation farmer. Since returning to the Delta, he’s involved himself in numerous community and farming organizations, always looking to help. He gave 35 years to the volunteer Courtland Fire Department, and has served on multiple USDA committees in addition to acting on the Board of Directors for the Reclamation District. While Doug continues to be a partner in the Lincoln Chan Farms LLC with his brother Wally, he devotes the bulk of his time to operations at Doug Chan Farms. Over the last 51 years, his crops have generally included wheat, triticale, safflower, corn, tomatoes and alfalfa. Today Doug and his family reside on the ranch just a mile away from the home where he first played in the dirt.

In the 1850s, Chuck’s great-grandfather Asberry Hustler and Marry Jane Humferville married. They soon traveled cross-country, by wagon train, from Ohio to California. Settling in the Sacramento River Delta. They farmed during the spring and summer months, and spent the remainder of the year panning for gold in Gold Hill, California. Returning to their homestead on Sutter Island with any profits from their mining ventures reinvested in the development and planting of their orchard enterprise on the banks of Steamboat Slough. Annually plantings of additional fruit trees were made and cared for each year, planting more and more pear trees as the years progressed. In 1872 they were able to purchase the land described as, ” Swamp and overflowed land” from the State of California on Sutter Island for a whopping $31.31.

Today Chuck and his family proudly reside on that very same ground and tend to some of those original trees. Chuck is currently the 5th generation to farm this soil. His granddaughters are the seventh generation living on the ranch. Chuck walks the orchard daily and most often, if you listen closely enough, you can hear him talking to the pear trees. Chuck is very proud of his family’s heritage here in the Delta. His great-grandfather was a founding member of the Franklin Lodge in Courtland, as well as one of the founding members of the Reclamation District 349 (Sutter Island). His grandfather, Carl Fiedler, worked as a cement contractor and poured the foundation for the Courtland High School auditorium, and the Clarksburg Community Church as well as the Freeport Bridge and many other bridges throughout the Community. Carl is the young newspaper boy emblazoned on the Hustler family pear label. A young Carl is depicted holding a newspaper that reads, “EXTRA – California Bartletts!” The family honored his efforts to sell newspapers in Golden Gate Park just days after the 1906 earthquake by putting him on their label. Carl was just a wee lad of 6 years old then, and the profits he made helped to sustain the family operation during the difficult market that followed.

Chuck’s family are the current stewards of this land with hopes that there will be many future generations of the Hustler line to follow.

Watch a video about Chuck and his sustainable farming practices here: 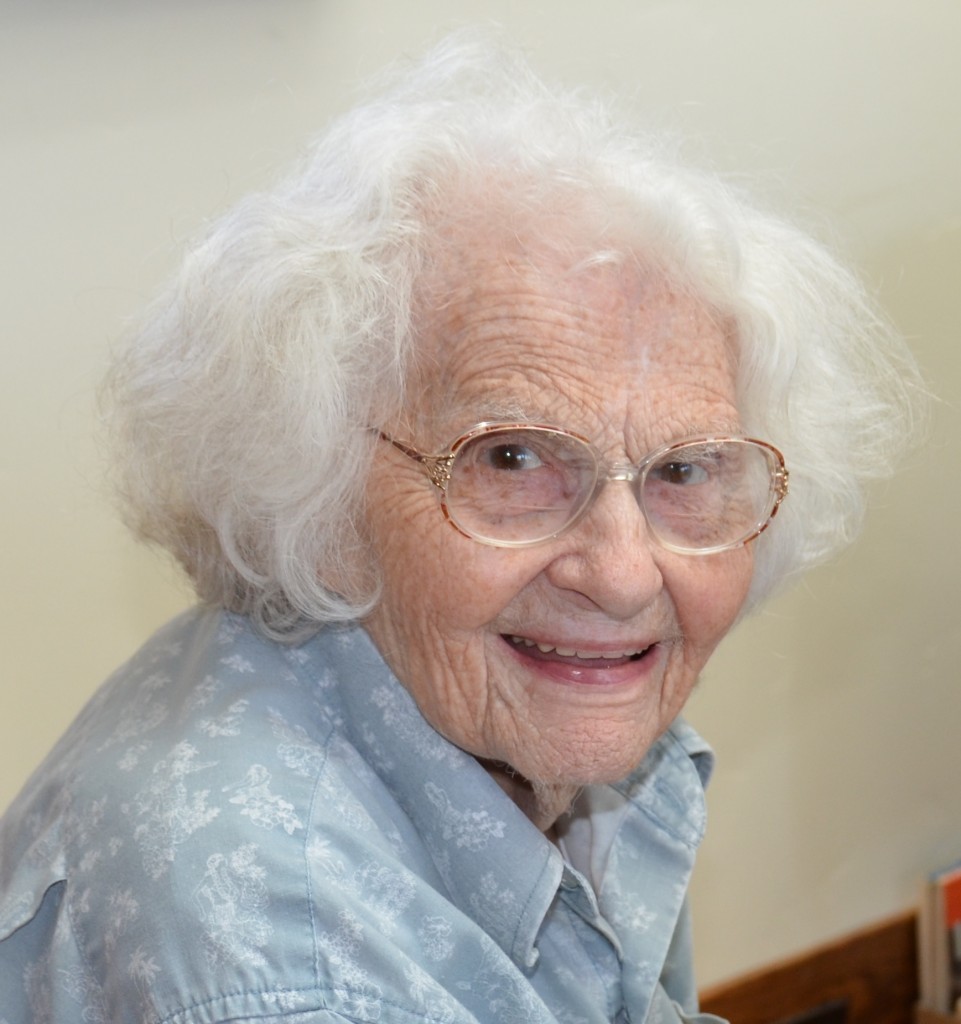 Born in 1923 Dorothy Hays grew up during the Great Depression with her twin brothers, Dick and Bob. The siblings were close in age separated by 18months which presented challenges for their young single mother. As a red head, Dorothy was affectionately nicknamed “Red” by her basketball teammates. She was called “Freckles” by the kids who weren’t as affectionate. She was very close to her grandparents and especially her grandfather who taught Dorothy to sing at age three. Dorothy continued singing in her high school and college choir’s and sang “Swing” music that was very popular in the 1940’s.

Dorothy attended USC, UCLA, Westmont, Sacramento State and San Diego State. She graduated with a degree in Education and Science and in 1961 Dorothy moved from Los Angeles to Courtland where she spent the next 32 years teaching local children. If you grew up in Courtland you remember the pretty “red-headed teacher” with a strong but gentle disposition. Dorothy’s teaching career spanned two generations. There are many adults living in Courtland today who had Dorothy as their schoolteacher.

Dorothy received a community service award in 2006 for her continued dedication to the Courtland community. At 90 years young Dorothy still serves as the Treasurer of the Courtland Town Association and continues to volunteer her time in support of the Courtland Library.

In celebration of Dorothy’s steadfast support for our community we honor the 2014 Pear Fair Grand Marshal- Dorothy Hays affectionately known as “Red”. 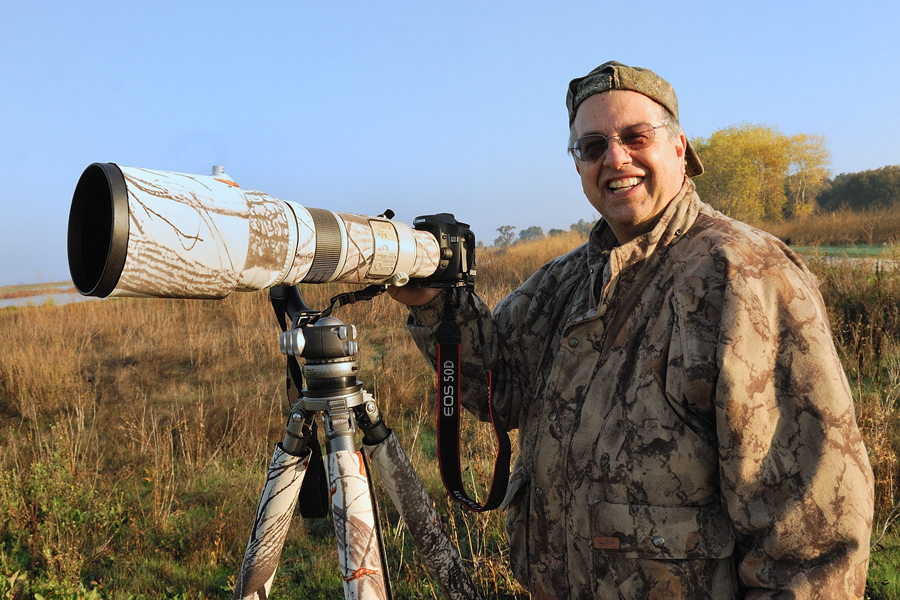 Mike was a scenic photographer who captured the natural beauty of the Sacramento River Delta. The painterly quality of his images exemplifies the drama that unfolds there.  Michael was a life long resident of the area. His photography, writings and public speaking engagements served to bring awareness to the value of this treasure and to the importance of the Delta’s preservation.

“I don’t create the natural beauty so abundant here in the Delta – God does. My job is to capture that beauty and artistically present it so others can enjoy it.” – Michael Pieretti

Sadly Michael passed in March, 2013. Michael was an avid, visual ambassador for the Delta and we miss him dearly. It is with great joy that his daughter Natalie Pieretti and son Brett Pieretti are displaying their father’s photography in his honor at this year’s Pear Fair.

To view more of his work, visit his website at www.mikepieretti.com. 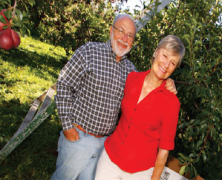 Doug Hemly, his wife Cathy, their son Matthew and daughter Virginia are  fifth and sixth generation decendents of Josiah Greene, who founded his family’s farm in the Sacramento River Valley in 1850.   Doug and Cathy’s grandchildren – the seventh generation of this deeply rooted farm family – enjoy playing and helping out at the family orchard.  Doug says “There is nothing more satisfying than to walk through an orchard that you have planted with your family.”